As you may have seen on our Facebook page, I found out a few weeks ago that the Hendler boys at Jack's Abby Brewing Co. were planning a Hop Picking event at their brewery in Framingham. Considering I haven't had a chance to stop by the new brewery yet, or try their beer, I figured I'd take the opportunity to pay them a visit to help them with their hop harvest, and recruited my buddy (and guest blogger) Mike to come as well. 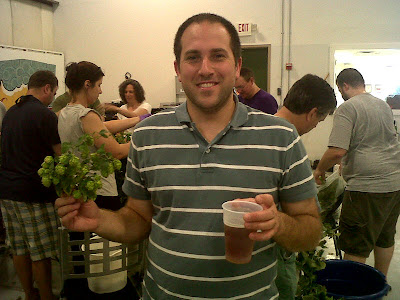 First off - the day could not have been nicer! I had gone up to New Hampshire the previous day to hang out with my buddy PJ, and it was nice; but, Sunday was a picture perfect weather day (at least to begin the day). The drive to Framingham was very pleasant, as the sun was out, and the mid 90's punk (Rancid's "Let's Go") was blasting away in my car. It took me around 40 minutes to get there, which was nice compared to the almost two hour drive to get to NH on Saturday.

Anyway, once we got there we walked in to see that the 15 or so volunteers had already begun picking the hop cones. I have to say...I have NEVER seen so many hops in my entire life. Sure, I've seen the commercial where Jim Koch of Samuel Adams fame visits Bavaria in Germany to choose his hops, but that was on TV and you can't really get a sense of the magnitude of the plant. The Jack's Abby crew have their hops - Willamette, Cascade, Centennial, and Mt. Hood growing organically in/around Bennington, VT, and brought in at least two to three dozen plastic bags of freshly cut hop vines to their brewery. They were dumped out on several tables, and everyone just picked away.

We quickly introduced ourselves to Owner/Brewer Jack and Eric Hendler before Mike and I picked our spots. I let him know I have this little website, and he was quick to thank him for the support here and on Facebook. Anyway, Mike and I proceeded to fill a 2-3 gallon bucket with freshly picked hop flowers within about 20 minutes. We couldn't believe how many flowers we were picking! 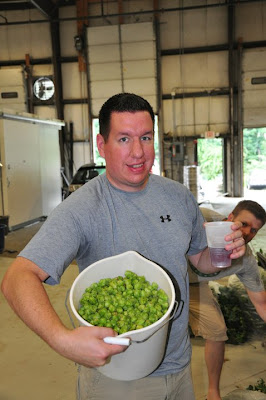 Drinking on the job and a Jack Hendler Photo Bomb

Around the time we filled our first bucket, Jack announced that there was beer and snacks available on a help-yourself basis, which was my cue to grab Mike and I a few beers. Jack had poured a few pitchers of both their Oktoberfest and India Pale Lager. I filled up our cups with the Oktoberfest, and went back to work. I have to say, the beer was very, very good. Malty, slightly sweet, and actually pretty refreshing and not heavy. What motivation for being productive! 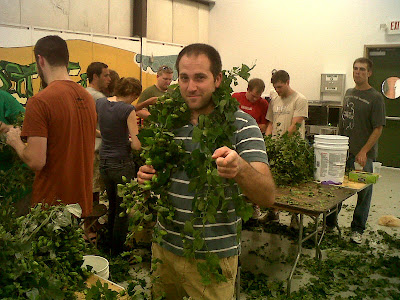 Mike getting VERY into picking hops, while looking good!

What was cool about this event, was that Jack's Abby Brewing was actually brewing their batch of Wet Hop Beer (official name yet to be decided) while we were picking the hops! Even now and then Jack would make an announcement that they were about to mill their grain and mash, then about 30 minutes later he announced they were transferring it to the brew kettle, and so forth.

Everyone was cruising along, and providing enough flowers to fill up the biggest hop back I've ever seen. I'm probably underestimating the amount, but it probably had to hold a good 30-35lbs of hops alone. From what I heard, they strain the wort through the hop back and into the fermenter (or it might have been from the mash to the brew kettle) to pick up all the hoppy goodness! 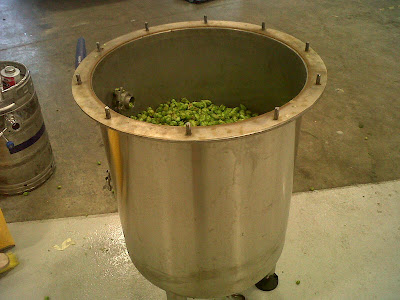 After a good two hours or so of picking hops, Mike and I decided we needed a short break. We took the opportunity to hit the tasting room, while grabbing a bite to eat. We tried the full current line up of Jack's Abby beers: Saxon Sons Pilsner (a nice malty beer), Hoponius Union India Pale Lager, Smoke & Dagger (similar to Harpoon's Munich Dark), Red Tape Lager (think a slightly hoppy red lager), and their Oktoberfest (malty, slightly sweet, delicious).

We returned to picking more hops, which seemed to go on forever, but thankfully there were great tunes playing (on vinyl nonetheless) on the stereo, and people were having fun. Having the opportunity to drink some tasty beer in the process didn't hurt either, and it made the day go by pretty quickly. It was also pretty cool that the wet hop beer was actually being brewed as we were working!

Earlier in the day Jack had offered up any hops to the homebrewers in the house, and to no one's surprise there were several. Mike and I left with a good amount of the hops, as did others, which are currently being dried out. We're planning on using them very soon in some of our homebrew batches.

The crew also raffled away two tickets to the upcoming 2011 Mass Brewers Fest to the person who guessed the closest to how many pounds of hops were picked that day. As a group we picked a combined 168lbs of hops!! 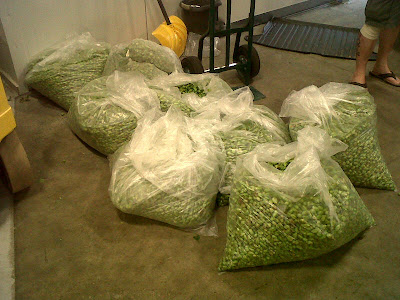 These were most of the hops

If you haven't stopped by Jack's Abby Brewing yet, it's worth a visit. The beers are great, and the guys are too.

Jack's Abby Brewing is located at 81 Morton Street in Framingham, MA. Stop by, say hello, and grab some beer - you won't be disappointed!

Posted by BrewEngland at 2:15 PM