So...we quietly turned 4 years old in March. So quietly, that we actually forgot. Unlike some other blogs, we haven't celebrated the years of writing, event attending, and beer drinking in one celebration - although that sounds like it would be a good time. But, it's fun to think back to all of the entries we've done over the years.

We started off incredibly slow in 2009. In fact, we really only posted a few times in the entire year. It wasn't until 2010 where things really started taking off and we had a great year in 2011. 2012 - present has slowed down considerably due to our work schedules...BUT, we have still attended some great events.

Cheers,
Adam & Sarah
Posted by BrewEngland at 11:50 AM No comments: 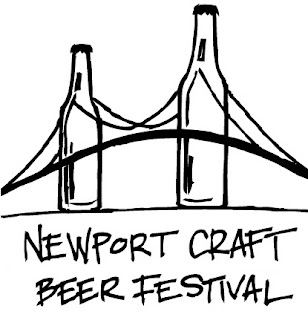 A festival is growing in a town known worldwide for its festivals. The Newport Craft Beer Festival (NCBF), in its second year, will be adding a second session to the festivities on Saturday April 27th 2013.  The event will be held in the same location as last year - on the daffodil-filled lawn of the historic Great Friends Meeting House - with sessions at Noon and 4pm.

The NCBF is produced by Newport Storm and Pour Judgement Bar and Grill with proceeds benefiting the Rhode Island Brewers Guild. There will be an emphasis on Rhode Island craft brewers and New England in particular, but the event will feature exquisite beers from across the US. Guests will be given the opportunity to sample multiple styles from thirty different breweries and converse with the folks who crafted them. Come taste the difference between a stout and a porter, learn the impact a unique yeast strain can have on aroma and celebrate the joy of craft beer!

This festival celebrates Newport’s rich brewing history (dating back before the American Revolution!) and is being held on a Newport Historical Society site. “Brewing craft beer is an art,” states Hank Whitin of Pour Judgement, “and that art has been ‘brewing’ locally for over 400 years! We want to celebrate that history and give brewers an opportunity to show off the brews they work so hard to hand-craft. It will be a ‘different’ kind of beer festival, with the focus on personal interaction between the brewers and guests. Set on the historic Meeting House lawn, the venue itself reinforces the history we are trying to bring attention to.” The NCBF is literally a few blocks from the bay and Long Warf where there's plenty of free parking and several hotels within walking distance. Newport is undoubtedly one of the great New England road-trip destinations, and now it's just gotten a little bit better.

The Newport Craft Beer Festival is strictly a 21+ event. "Tickets are $45 and available atwww.NewportStorm.com/GearStore. Tickets include admission, unlimited beer samples, live music, a souvenir glass and a home brewing demonstration.  Neighborhood restaurants the Fastnet, Perro Salada and the Fifth Element will be offering small plates for sale. For up to date info follow the Festival’s Twitter feed: @NewportBeerFestival, Facebook page:facebook.com/NewportCraftBeerFestival or check out www.NewportCraftBeerFestival.com.

Newport Storm is Rhode Island’s Microbrewery, handcrafting over 35 unique brews since 1999. Their Visitors Center is open for tours and tastings from 12pm-5pm on Weekdays and Weekends (except Tuesdays). Newport Storm beers continue to be distributed throughout RI, MA and CT, with their beer lines including the flagship Newport Storm-Hurricane Amber Ale, Newport Storm-Rhode Island Blueberry, the Cyclone Series of limited release beers, the Storm of the Season beers, and the Annual Limited Release Series of bottle-conditioned beers.

Pour Judgement Bar and Grill is Newport’s place to ‘have a night out without spending a day’s pay.’ Located in the up and coming section of Newport’s lower Broadway they offer great food and a wide selection of craft beers. www.PourJudgement.com

Posted by BrewEngland at 9:15 AM No comments: