"Take a drink, and you'll sink, to a state of pure inebriation," Pawtucket Pat from "Family Guy" 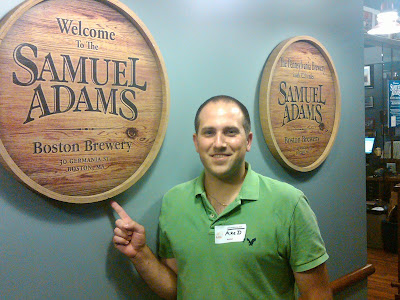 These words were being sung in my head as I was walking into the American Homebrewers Association (AHA) Rally at the Samuel Adams Brewery on last Thursday. If you're a homebrewer and aren't part of the AHA I highly recommend you sign up just for the rallies alone! The people at Sam Adams did a great job of welcoming the local members of the AHA to their brewery. Hell, even if you're not a homebrewer and just enjoy craft beer I recommend taking a tour of one of the grandfathers of the craft beer industry.

When I arrived (and after I was done singing to myself) I was handed a name tag, pint glass with a raffle ticket, a small sample cup, a card for four samples and one taste test, and two poker chips (good for a BBQ dinner and a sample of the Patriot's Homebrew Contest winner). 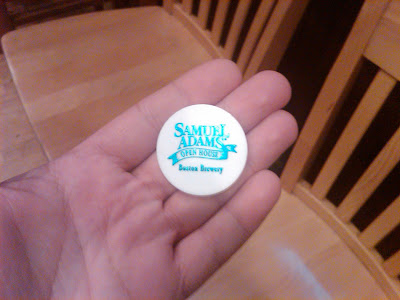 Not a bad start for a free event! A trip through a tunnel with all kinds of information about brewing leads into a room with a bunch of barrels of beer (for the Samuel Adams Barrel Room Collection) and several 25 barrel fermenters that I would love to try and brew a batch of beer in.
The first stop after passing by the fermenters was to taste test the two beers they had setup for us to vote on. Our vote was going towards the final decision which one would get put into a future mix pack. The first was beer brewed on a bed of oak chips that had a subtle smoky taste to it. The second one was a darker beer with a hint of maple syrup and pecans in it. Despite not being much of a maple syrup fan (I know, sacrilegious for a New Englander to say this!) it wasn't half bad. I cast my vote for the first one and moved on.

After perusing a display of products that Beer & Wine Hobby of Woburn had setup I moved into the tap room to get myself one of my four samples. I decided to start with a Deconstructed Latitude 48. They get their name from the fact that the regular Latitude 48 has five different types of hops in it. Sam Adams decided to brew different versions of the beer focusing on just one type of hops. The one I had was based on Hallertau Mittelfrueh hops.

My buddy Mike from work arrived just as I was ready for another beer. I decided to sampled the East-West Kolsh. This beer was fairly light and ended up going well with the BBQ food setup they had outside in the beer garden. The beer garden was particularly cool to me since I got to sit next to some hop plants they have growing. It made me realize that my hops have a ways to go (more on this in a later post). 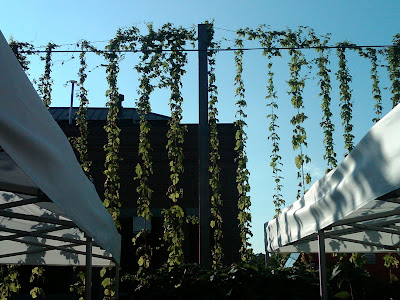 After eating some great BBQ I decided it was time for another sample. I decided to go with a Hefeweizen they had on tap. It had a good flavor and aroma overall. Its lighter body was perfect for the weather outside. We were all ushered outside for some raffles and to hear from Jim Prucha, this year's winner of the Patriot's Homebrew Contest. Each year Sam Adams hold a competition to decide a beer to be brewed and served on tap at Gillette Stadium during Patriots games through out the season. Jim brewed a Baltic Porter (which is somewhere between a Russian Imperial Stout and a regular porter) which had a great full body, smooth chocolate undercurrent and pleasant aroma that is sure to keep any fan warm during the cold winter months in New England.

After taking an opportunity to hear Jim field any questions on his brew, the AHA held raffles for a few door prizes that included some T-shirts, books, good bags with brewing supplies, and the grand prize - which was a pair of tickets to the Mass Brewers Fest. I managed to win a t-shirt that had the motto of the AHA ("relax, don't worry, have a home brew"). I would have been disappointed I didn't win the tickets if I didn't already buy mine earlier in the week.

After grabbing another Deconstructed Latitude 48 (my favorite beer out of the ones I got to sample), I took a chance to talk to a few homebrewers about their setups and what they've brewed in the past. Overall I say it was a great first rally and it makes me even more excited for the AHA Rally at Allagash Brewery in Portland, ME later this month!

You can find Mike on Twitter under the handle @Mickle623!
Posted by BrewEngland at 12:05 PM