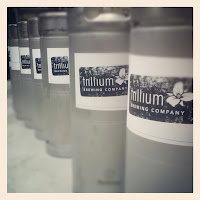 “Opening the retail shop and releasing our first beer, Trillium, is the realization of an extensive family and community effort.” said JC Tetreault, co-owner of Trillium Brewing Company. “Esther (wife and co-owner) and I couldn’t be more excited; we can’t wait to see you at the brewery!”

Brewer Adam Goodwin describes the beer: “The simplicity of the recipe lends to a wonderfully complex yet still approachable beer. A beautiful nose of spice and pepper, coupled with flavors of fermentation-derived fruit and breadiness. Firm bitterness, nicely carbonated with a dry finish, but there’s also this elegant smoothness to the mouthfeel from the wheat in the recipe.” While there are eventual plans to bottle beers at the brewery, Trillium will be initially available in 64oz. growlers, which are glass containers that can be refilled at the brewery.

The retail shop will open for the first time on Thursday, the 21st of March at 4pm and will have regular hours on Thursday and Friday (4-7:30PM), and Saturday (10AM-4PM). Growler fills and merchandise will be available for sale, but sampling of the brewery’s beers won’t be available until a permit can be obtained by Boston’s Inspectional Services Department. Initial draft accounts will be The Publick House & Monk’s Cell in Brookline and Vee Vee in Jamaica Plain.

Bull Jagger Brewing Company, a lager-only brewery out of Portland, Maine announced yesterday it is closing its doors and selling off the brewery. My buddy Brian over at Seacoast Beverage Lab hinted at this yesterday, as he saw a Craigslist add out of Portland listing Bull Jagger's brewing equipment up for sale, and the announcement was confirmed by the brewery yesterday on Facebook.

The brewery was founded in the Fall of 2011 and had been turning out 16.9 oz bottles to Main craft beer drinkers by offering up Portland Lager, Big Claw Pilsner, Original No. 19 Baltic Porter, and Dirigo Crimson Lager, among a few other smaller releases.

"Friends of Bull Jagger~
As some of you know, the brewery is for sale. Bull and Jagger are going their separate ways, and under the circumstances, we have no choice but to close the company. In the coming weeks, we will have fresh beer to package and sell. Our lagers are and will be available in Maine through our distributor, retailers, and to the public while supplies last.
Tom Bull, co-owner and head brewer, has been asked by the owners of the Big Claw brand to work with another local brewer to brew Big Claw Pilsner (and keep Tom brewing in general) for the coming spring and summers seasons . . . and beyond.

A world of gratitude to all of you who have supported us-- we have learned a lot, laughed a lot, and made lots of new friends along the way.

After the brewery is sold, Tom will regroup and continue to pursue the passion that made him Maine’s 1st all lager craft brewer. Until then, enjoy our local lagers and keep supporting your local craft beers and beer sellers.

Drink up boys and girls, the brewery needs the kegs.

Prost!"
Posted by BrewEngland at 8:42 AM No comments: 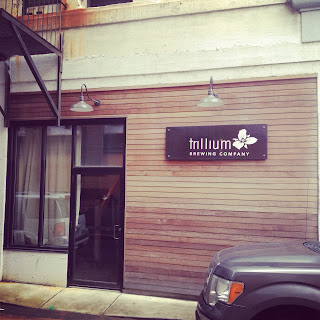 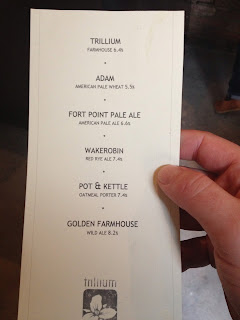 Trillium Brewing Company, located in the Fort Point Channel neighborhood of Boston, officially began production earlier this month. We received an invitation to attend a pre-opening soiree in January and got a chance to see the new brewery as well as sample some of their soon-to-be released beers. The people of Boston are going to be very pleased with the quality and complexity of the Trillium beers.

Boston, MA, March 8, 2013 – Trillium Brewing Company began brewing operations last week in their Fort Point Channel facility after receiving their Certificate of Occupancy from the City of Boston.  More than two years in the making by owners JC and Esther Tetreault, Trillium is now one of just three production breweries in Boston. They will launch with their eponymous flagship, Trillium, a pale farmhouse style ale.

“From the initial demolition to pilot batch brewing, we were lucky to be surrounded by all the support we needed to create a beautiful space in the city that we’re finally ready to share,” JC said of the buildout. “I can’t tell you what a relief it is to have beer fermenting in the tanks.”

Adam Goodwin, Trillium’s Brewer, shares what drew him to Trillium and encouraged him to move to Boston to help the family-owned business start production. “As an urban farmhouse-style brewery Trillium will be delivering truly unique beers with a strong focus on local ingredients, right down to special beers brewed with our locally harvested wild yeast.  This means a strong connection to the local community, agriculture, and microbiology.”

Trillium will continue to release each of four year-round styles over the next few months. They will also offer new and innovative small batch beers as well as initiate a barrel program to create special release wild and sour beers.  Trillium will be available at a limited number of select accounts and through retail at the 369 Congress Street brewery in Boston. Leading up to the initial launch plans and opening of the retail space, Trillium has opened their online merchandise shop through their website.

For more information about Trillium, and to get up-to-date notifications about the launch details, visit their website to get updates by signing up for the mailing list.

Posted by BrewEngland at 11:14 AM No comments:

Save the Date - Bacon & Beer Festival 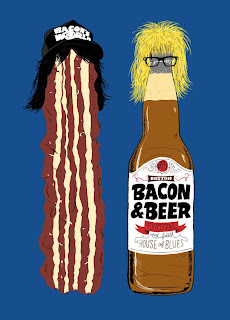 More information will be posted soon, so check out the EAT @ website here.
Posted by BrewEngland at 1:48 PM No comments: 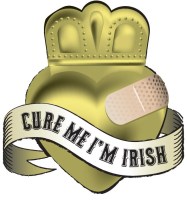 It's officially here - the Sixth Annual Cure Me I'm Irish fundraising event for our friends at the Beat NB Cancer Foundation. This will be Sarah and my fourth year volunteering for this incredible event, and our third year in a row setting up a kick ass beer tasting for the annual St. Patrick's Day Celebration With a Purpose!

Our good friends at Mayflower Brewing Company, Notch Brewing, Slumbrew, Jack's Abby Brewing Company, and Backlash Beer Co. will be on hand pouring out delicious, hand-crafted beers for the 1,000+ ticket holders and volunteers.

If you purchased a ticket you'll be able to sample the following tasty brews:

If you haven't purchased a ticket yet and are interested in attending, you can click here to purchase your tickets online. Tickets are currently $90 and includes complimentary food, beer and wine, this awesome craft beer tasting, and live music from the U2 tribute band Joshua Tree.

If you're unable to attend though, please considering making a donation to this incredible organization aimed at helping cure kids of cancer!
Posted by BrewEngland at 3:05 PM No comments:

Battle Road Brewing Company takes its name from the history surrounding Boston and the Commonwealth of Massachusetts. The Battle Road refers to the Battles of Lexington and Concord on April 19, 1775.  These battles showcased the perseverance and resistance against tyranny that were the hallmarks of the American Revolution and marked the beginning of the War for Liberty.

The 1775 Tavern Ale is a light to medium bodied dry, unfiltered pale ale hopped with a single varietal -Slovenian Styrian Goldings.  The Lexington Green IPA is dry and crisp, with a clean malt delivery and a burst of hop flavor, and even more aromatics of Chinook, Centennial and Cascade hops added from first wort to the last possible moment before fermentation.

Battle Road Brewing Company was founded in 2012 by Jeremy Cross, a graduate of the prestigious Master Brewers Program at the University of California Davis and Scott Houghton, recipient of multiple Gold Medals at the Great American Beer Festival and a graduate of the Master Brewer’s Association of the Americas “Malting and Brewing Science” program at the University of Wisconsin.

Battle Road Brewing Company is currently brewing its beers through Mercury Brewing Company in Ipswich, MA.  The beer is being distributed through Baystate Wine and Spirits and is currently available in locations across the Commonwealth.  For more information or to find a location, please visit www.battleroadbeer.com

Posted by BrewEngland at 1:42 PM No comments:

Three Vermont breweries are tearing up the world of craft beer. Hill Farmstead, The Alchemist, and Lawson's Finest Liquids are gaining huge popularity with Hill Farmstead being recently named the Best Brewery in the World by Ratebeer.com.

If you haven't visited these breweries in Vermont, or received some of the beers by these breweries, you may not understand their popularity. Personally, we have yet to try any of Sean Lawson's beers, but we've had a few from Hill Farmstead and several cans of The Alchemist Heady Topper and they are simply amazing brews.

The Burlington Free Press published a great article Friday, which we recommend you check out here.
Posted by BrewEngland at 11:26 AM No comments: