Narragansett’s Imperial Bohemian Pilsner was brewed under the supervision of award-winning Brewmaster Sean Larkin. The first unfiltered offering from Narragansett, the pilsner offers slight bitterness in the front followed by a full-bodied malt flavor complimented by spicy and fruity earth-toned noble hops. The pilsner is made using Pale malt, Pilsner malt, Wheat malt and Cara Blonde malt from Belgium. At 35 IBUs (International Bitterness Units) it is bittered with Northern Brewer hops and

Hallerteau hops and also double dry hopped with the Hallerteau.

The Imperial Bohemian Pilsner is a nod to Narragansett’s German heritage and the brand’s exploration of the lager beer style. While many craft breweries today focus on ales, ‘Gansett has seen greatest success and consumer interest in response to its lager offerings. Along with the company’s Marzen-style Fest, Helles Bock spring seasonal and flagship Lager, the Imperial Bohemian Pilsner is a further journey into the lager beer style.

The Narragansett Imperial Bohemian Pilsner is the company’s second offering in the Private Stock series, as the company continues to expand its acclaimed craft selections.  In December 2012, Narragansett introduced a limited-edition Imperial IPA, offering ‘Gansett fans a bigger-bodied brew, while also celebrating the company’s 122nd anniversary.

For further information on the Narragansett Imperial Bohemian Pilsner or to find a retailer near you, visit: www.narragansettbeer.com.

Thirsty for more? Visit: www.narragansettbeer.com.
Posted by BrewEngland at 12:56 PM No comments:

Sam Adams: Now (finally) in a can

By now, you have probably heard that Jim Koch, founder Boston Beer Company, makers of Samuel Adams brand of beers, has announced that Boston Lager will finally be made available in a can. But, not just in any can.

For the past several years, Koch and the team at IDEO - the designers of the Apple mouse, have been working on prototypes. The new Boston Lager can, project code name "Bunker Hill", will feature a tulip shaped top of the can with a wider mouth, forcing drinkers to open their mouths wider and capturing more of the aroma and flavor of this classic lager.

It's a lengthy read, but is really cool. Give it a read at the Boston Globe 99 Bottles Blog here!

Here's an image of the new can, which looks really cool: 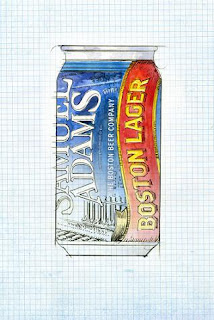 Posted by BrewEngland at 2:26 PM No comments: 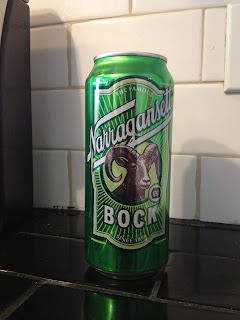 Over the past few years, Narragansett has introduced several seasonal beers to go along with the perennial New England go-to for tall boy needs 'Gansett Lager. The Narragansett Bock was originally brewed in 1912, two months before Fenway Park opened its gates for the first time!

The Narragansett Bock pours a vibrant dark golden hue with a short off-white foamy head. We normally drink all of our 'Gansetts straight out of the can, but wanted to show the color and head. The Helles Bock gives off a nice, subtle malty sweet aroma. It also has gentle floral aromatic hop notes.

The flavor definitely backs up the aroma, as the Bock is surprisingly sweet, resting on its malty backbone. It has a pleasant crispness to it, and features a lingering malty aftertaste. It has a moderate to full mouthfeel, and finishes clean, but only somewhat dry in our opinion.

We give the Bock Spring Seasonal a medium to high drinkability level. After all, most Narragansett beers are incredibly drinkable, which gives this brewing company its high appeal. You can easily put down, 1, 2, or event three pints with ease, especially seeing how the ABV level is fairly moderate.
Posted by BrewEngland at 11:00 AM 3 comments: