Ladies and germs, welcome to the show! My name is Mark and I write/live/love ReleasetheKrausen on the reg, but my buddy Adam here at BrewEngland called an audible on the most entertaining fest of the year and asked me to go as a guest in his place. BIG MISTAKE. Because The Drink Craft Beer Fall-to-Winter Fest is easily one of the most underappreciated, high-quality beer festivals in the New England area. Year to year, they continue to impress yours truly, and I look forward to this nonsense all summer from the end of American Craft Beer Festival. As for 2013’s business, lets break down why I've got my jimmies all rustled here.

First of all, the beer selection was amazing. 25 New England craft breweries, all pouring up to 5 different offerings, were all in a constant state of good cheer. From the big guys, like Sam Adams, to the smallest outfits, like Urban Farm Fermentory, every brewery brought their A-game. This was partially due to the fact that the fall-to-winter season is home to some of the most creative and sought-after beer styles all year: imperial porters, Russian imperial stouts, holiday ales, and rum/whiskey/cask aging projects are just a few of the options. Flavor combinations including spices, nuts, oak, juniper, vanilla, pine, caramel… every month colder than March is home to beers that are profoundly complex in a deep, dark way. Drink Craft Beer knows this and primes the pump with the best local beer around, including (but not exclusively) beer hitting mad combinations of these flavor palates, PLUS more that you would never even think of. I’ll get to examples later.

Secondly, DCB is one of the only organizations I know that gives a hearty nod to cideries (Real word, who knows) on a regular basis. A whopping 20% of the invited purveyors were peddling a prominent plethora of pressed apple poisons. It’s New England, people; fall-to-winter is like the Superbowl for our booming apple industry. Act like you’re on the home team! The things the local cideries are doing with apples are BLOWING my mind right now. And for a Fest to dedicate 20% of available space to this underappreciated realm of spicy fruity treats? That’s respect, yo.

Then there’s the actual festival itself. The space DCB uses, Space 57 in Boston in the Revere Hotel, is perfect for Fest events. DCB capped the ticket count at a number that was below the capacity of the space, and I actually had room to swing my elbows and do my I-found-a-great-new-beer Victory Dance. The lighting, the flow of the crowd, and positioning of new and promising breweries were all supah-fine. They put up a live Twitter board filtering the hashtag #FTWfest, which engaged the whole crowd and provided a forum for public beer praise, special “secret offerings” announcements, and even an engagement, I think? The food available was from local restaurants and food trucks, including the ever-popular Union Square Donuts Bacon-Maple donuts, and was perfect for soaking up the alcoholic offerings of the night. And because I KNOW you’re all wondering about it, here were the best things that I found in liquid form at the festival. These weren’t full reviews, because Iin my opinion you can’t get much of a review using a 2oz tasting. Maybe Adam will let me participate in Tuesday Tastings? Huh? Huh? Anyways, I’ll be purchasing these treats at the Craft Beer Cellar in the next few days to start stocking my nuts up for winter. NOTE: I successfully avoided taking pics of my dirty tasting cup. In no particular order, may I add.


If you made it all the way here, thanks for reading my babbling all the way to the end. Give some love to DCB via Facebook and Twitter, but do yourself a favor and mark down the next fest coming up from these guys, because they are classy individuals running kick-ass festivals; you can’t afford to not experience it someday so get on that ish. If you went, hit me up in the Twitterverse at @bono_burr to tell me how spot-on I was with my one-liner reviews. You can also tell Adam how much fun you had reading my guest blogging. I may be back for more! Until then, Salute!

Posted by BrewEngland at 10:41 AM No comments:

Speaking of Slumbrew Yankee Swap, tonight is your first opportunity to try it at the Drink Craft Beer Fall to Winter Fest, kicking off tonight at Space 57 at the Revere Hotel in Boston.

The FTW Fest was the first Drink Craft Beer festival we attended last year, and boy oh boy was it great. First off, Jeff and Devon really work hard to put on a fabulous event. They limit the breweries to 25, which also includes cider and mead makers, all of which are from New England. Obviously, this is something we strongly support!

On top of that, they also limit the amount of tickets sold, so it's not a complete cluster fuck while trying to get beer. The beer lines move quickly, and the brewers ALWAYS bring some great beers - usually some one-offs and special brews specific to the DCB themed festivals. It makes for a unique festival experience, no doubt.

Tickets are still available for all sessions, but are likely to sell out as they tend to do! Tickets are $50 for all three sessions: Tonight from 6-9:30pm, Tomorrow from 1-4:30pm and 6-9:30pm and your ticket includes unlimited 2 oz samples of 75+ fall and winter beers from 25 New England craft brewers. You'll also receive a biodegradable tasting cup and a fest guide!

Check out the full brewers list at drinkcraftbeer.com and get your ticket fast!
Posted by BrewEngland at 11:02 AM No comments:

Wow...it's been a while since we've posted. It's also been even longer since we posted a Tuesday Night Tasting. While we realize it's Friday, it seemed like as good of a day to post our latest review. 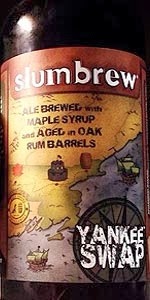 This is a new special release beer by Slumbrew, and the first barrel aged beer that they've done commercially. It has a bold, dark brownish hue with a light chocolaty brown head. It pours well, and has a medium, creamy, fluffy head that hangs around. It also gives nice lacing to the glass as you drink it down!The aroma is incredible. The Turkey Shore Distilleries/Old Ipswich Rum barrels really shine through on this beer. It has a great subtly sweet malty and vanilla scent, and nice oak notes to it that are inviting.The first sip really gets you into this beer. The vanilla notes carry over, and you're palate is engulfed by a rather mild malt profile. The rum is noticeable too, but is not overbearing. When I drank the first half of the bottle, I could not believe this beer was 12%. Much like the Slumbrew Trekker Trippel, the ABV of the Yankee Swap drinks seemingly much lower than what it actually is. I can't wait to have this on draft.It has a fairly full mouth feel, yet is not super heavy. This is most likely due to the pale malts used in the mash. For a strong ale, it is definitely drinkable and is really enjoyable. It's highly recommended that you share this with someone you like, because it could prove difficult putting down an entire 22 oz bottle of 12% ABV beer.Drink now, or age for a while. This beer will hold up!
Posted by BrewEngland at 10:03 AM No comments: