Cure Me I'm Irish Wrap Up 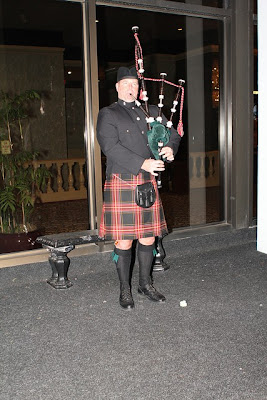 What can I say...this year's "Cure Me I'm Irish" was a blast! This was the fourth installment of this annual event, and the second in which Sarah and I volunteered for. As a refresher, Pat Lacy - the President of the Friends of Will Cancer Foundation - asked Sarah and I to line up five breweries to include a beer tasting as part of Cure Me. That we did, and it turned out to be a huge hit!

The event was held at Lombardo's in Randolph, which neither Sarah or I had ever been to. As it turns out, the building is HUGE. There is a grand spiral staircase that loops from the edge of the loby to the second floor, where the majority of the event was being held.

Once guests arrived upstairs, they were able to get their sample cups for the beer tasting. The first table that guests could stop at was Magic Hat. Katie, the local sales rep for NA Brewers, brought their newest seasonal mix twelve pack, which features #9, Circus Boy, Vinyl (their seasonal), and their Demo IPA (Black IPA). Peter Augis, the co-owner of Blue Hills Brewery, was pouring samples at the next table. He had their Black Hops and newest release Anti Matter Pale Ale on tap. He also brought some of their other offerings with him, such as their IPA and Imperial Red IPA.

After that were our friends Tom and TJ from Cape Ann Brewing. Sarah and I are huge fans of Cape Ann, and were really pleased they came. They brought a great range of bottles, including their Fisherman's Navigator, Ale, Brew, and IPA. These two gentlemen always come in style, as you'll typically see them in their bright orange rain gear. It's hard to find two nicer guys too. 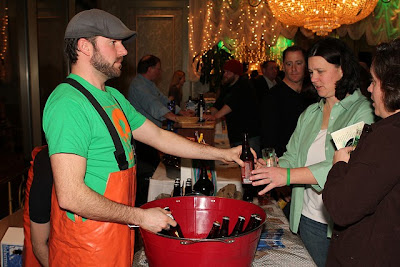 Mayflower Brewing, the first brewery to confirm for the event, were the next table. On top of pouring some of their staples such as their Winter Oatmeal Stout, Porter, and IPA, they also poured their NEWEST beer - Seasonal Spring Hop Ale. They also brought the biggest crew of the night: Director of Sales Jeff (pictured below), Sales Reps Ryan, Christina, and Ian, not to mention Ryan's girlfriend Rachel. 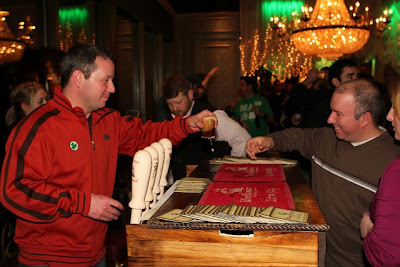 Mayflower also donated a great raffle prize, which included a mix case of beer, a beer bucket, towel, and some other great prizes. I'm not sure who walked away with it, but I'm sure they were happy with it!
Last, but certainly not least, were the boys from Cody Brewing Company. Perhaps the smallest brewery and least known, Cody Brewing seemed to generate a lot of buzz. They brought their No Named IPA, and Wheelers Brown, both solid brews. In fact, people were quick to return for more of the Brown all night! It was definitely at the top of my list of great brews that night! 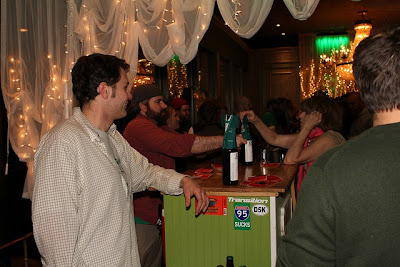 Sarah and I also had our own small table, where we raffled off a case of Woodchuck Cider to one lucky winner, not to mention handed out Woodchuck pint glasses, t-shirts from Sea Dog Brew Pub in Woburn, Wachusett Brewery key chains and coasters, among other items.
All in all, it was a great night. We were so busy during the beer tasting that we missed most of the other parts of the event; however, I know it was another success. The beer tasting only added to the overall experience by those in attendence, and it seems to have received some great feedback!
I can't thank the brewers enough for their generosity, and we look forward to working with them again in the near future!
Here are some details on the breweries. We have been to all but Cody Brewing Co (we'll visit soon!), but I definitely recommend stopping by their facilities!
Mayflower Brewing Co. is located at 12 Resnik Road in Plymouth. Tours and tastings are free. Email them at info@mayflowerbrewing.com for more details!
Cape Ann Brewing Co. is located at 11 Rogers Street in Gloucester. They have a full service brewpub, that is not to be missed!
Blue Hills Brewery is located at 1020 Turnpike Street #3B in Canton, MA. They have a great tasting room, which features a great selection of hand crafted beers!
Magic Hat Brewing Co. is located at 5 Bartlett Bay Road in beautiful South Burlington, VT. They have one of the coolest tasting rooms and retails spots we've seen. It's definitely worth the trip!
Cody Brewing Co. is located at 36 Main St in Amesbury, MA. While they don't typically offer tours, they do fill growlers at their brewery!
Posted by BrewEngland at 4:00 PM

The beer tasting was a fabulous addition to Cure Me, I'M Irish. It was great to sample some new craft beers. I think that you have also gained the attention of many beer drinkers out there who may not have wandered into the craft beer territory before. I heard many people asking questions about the different varities being offered.

I had Fisherman's Ale and IPA (IPAs are on my favorites list) for the first time and enjoyed them both!

I am already a fan of the Mayflower IPA but enjoyed their newest seasonal Spring Ale! :)


Thanks again for supporting this cause.

I really appreciate the feedback! I'm glad to hear you were able to try some new beers, and get to try some old ones again.

What you mentioned is exactly what we were aiming to do - introduce people to the world of craft beer in a no-risk environment like Cure Me! I hope we've converted even just one person, and from the discussions we had at the event, it sounds like we were successful!