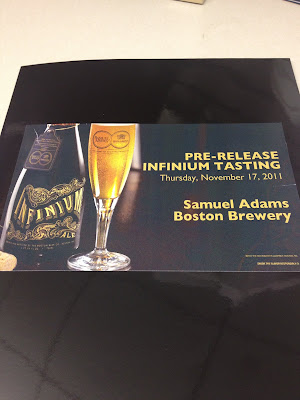 Last Thursday night the Boston Beer Company celebrated the upcoming release of the 2011 Infinium Ale by hosting a pre-release tasting at their brewery. This is the fourth event over the course of the previous week, and the second one I attended, and could’t have been more fun.

I brought my buddy, and occasional Guest Blogger Mike Micalone, as well as my buddy Mike Talley along with me, and from the moment we walked in I knew we were going to have a great time. Mike Talley next to a 134 bbl wooden fermenter

There was a special pre-gala portion of the event set aside for media personnel, such as bloggers, as well as the spot local celebrity, which was held inside the Barrel Room Collection room within the brewery itself. Meg, one of the reps Mike Micalone and I have run into at the AHA Rally, MA BrewersFest, and Beer Summit/Sam Adams Octoberfest, guided us to the room, where we saw some familiar faces. Brian Aldrich from Sea Coast Beverage Lab, Sean from 2Beerguys.com, Becca, Lindsay, and Heather from MA Girls Pint Out were all inside enjoying the Infinium and light spread that was laid out.

After about 15 minutes of socializing, Jim Koch came into the room to everyone’s delight. He right away came up to myself, Mike Talley, Brian, and Sean, introduced himself, and asked for feedback on this year’s Infinium. He was genuinely interested in finding out our thoughts on it, which I thought was incredible, considering whom he is. Jim then gave a brief speech, giving the 30 some odd people in the room an idea of how they came about collaborating with Weihenstephan on the beer (which was quite amusing), the process of making the beer itself, and the specific purpose behind the particular style of beer that Infinium has developed into. After his chat on the beer, he then introduced three of the Boston area’s finest mixologists, who had each concocted “beer-cocktails” specifically using the 2011 Infinium Ale. All three of these gentlemen spoke as passionate about their beer cocktails as Jim Koch himself spoke about his Infinium Ale. It was really cool to see how psyched Ran, Adam, and Bob were about mixing these drinks for us, and they were all some really interesting drinks for sure. They're not the typical drink I would go for, but it was a great opportunity to try something new.
After everyone gave their speeches, the rest of us continued to mingle, take pictures, and meet some new people. There were some folks from Yankee Brew News, as well as Brewing News, which all have a vast knowledge of the regional breweries and brews, which was nice to chat back and forth of where we had each been as well as spots I need to check out. As it turns out, and I knew to a certain extent, that there are many places in Vermont that I must visit in the next year or two.

Dan Hausle of WHDH TV, Channel 7 in Boston made an appearance as well, sans camera crew. I introduced myself and managed to chat with him for a good 10-15 minutes. As it turns out, Dan is a craft beer lover, and according to his profile on the WHDH website he's also a homebrewer (I wish I knew that last night). It turns out he's from Buffalo, NY as well, so it provided a good opportunity to talk sports as well (and make fun of him for his teams performing rather poorly at times).

After hanging out in the Barrel Room for a while, we headed into the brewery and other tasting rooms to get a few more samples of some of the other fine offerings by Samuel Adams. While in the tasting room the Mikes and I met Chris, a military veteran who currently works as the building manager at the Boston Beer Company's corporate headquarters, who happened to be helping out pouring drinks. We shared a few funny stories about trips to Cooperstown, NY and where to find Old Fezziwig on tap - we're still waiting to see where in the Boston area you can find it (I've never seen it on tap). Once we find out, we'll make sure to share with you!

Overall, it was a great evening. Jess, Meg, Chris, and Jim all made this night a really enjoyable experience that I hope to partake in again sometime soon.

Infinium Ale will officially be released next week, and should retail for around $20. Last year I managed to try a few bottles, and really enjoyed it. This years is equally as good, if not better than last year's release, and is definitely a bottle you can enjoy with friends.

Posted by BrewEngland at 1:30 PM

Great event all around. I look forward to getting some more Infinium and hitting next year's release!

It's funny that you brought 2 Mike's with ya. Maybe bext time you can bring a couple of "Joes" or "Jims".

Thanks Sean. Bringing two Mikes made it easy for me to remember Brian's buddy's name, not to mention Mike from Yankee Brew News. I'll work on the Joes or Jims, but I can definitely get two Sarahs.