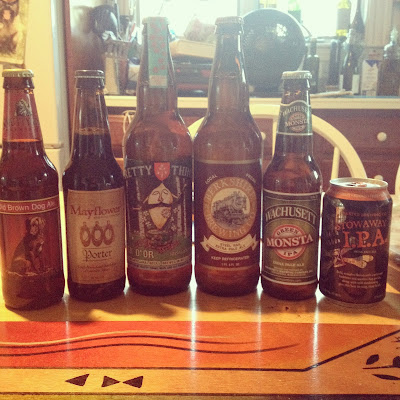 Today, I finally completed my first beer trade. See, Sarah's cousin Tracy, who is originally from Massachusetts, currently lives in San Francisco and has access to some great beers you just can't get out here. Back in March we decided to do a trade so we could get some beers that are impossible to get on either coast.

I had only one real request - that she send two bottles of Russian River's Pliney the Elder and/or Pliney the Younger. I had also stated that I wouldn't mind something from Alaskan Brewing Co. as I have a few friends who live in Anchorage, AK and figured it'd be cool to see what they can drink up there.

Well, Tracy came through! She sent two bottles of Pliney the Elder, a bottle of Russian River Damnation, Alaskan Brewing Co.'s IPA, and one more that I simply can not remember. Unfortunately, with the wedding, school, work, etc. I couldn't find the time to return some beer. Having chatted with another one of Sarah's cousins that just moved to southern Oregon, we decided to do a beer trade as well...but, I couldn't do one with him until I sent Tracy some beer. This was the week to get it done

I wasn't going to drop the ball again, so I hit Supreme Liquors in Quincy for most of my beer needs on Monday. Originally I was going to send her Mayflower Brewing Co's Porter, Wachusett Brewing Co's Green Monsta IPA, Berkshire Brewing Co. Steel Rail Pale Ale, Pretty Things Jack D'or, Baxter Brewing Co's Stowaway IPA, and Smuttynose Brewing Co's Old Brown Dog Ale. Through the powers of Twitter, Martha of Pretty Things let me know that their beer is actually available for purchase in San Francisco, so I knew I couldn't send that to her. I mean, the point of the trade was to send beer you can't buy yourself...so instead of sending the bottle of Jack D'or, I replaced it with a bottle of Backlash Beer's Convergence.

I still had all the packaging Tracy sent my beer in, so I simply reused it. It made it super convenient, as we essentially sent each other the same size bottles, so I knew hers were going to fit. With lots of bubble wrap, and large zip lock bags in case of breakage, I packed the little buggers into their box for the week long journey from the East Coast to the West Coast.

With good luck and weather, Tracy should receive her beer next Friday...just in time for the weekend! I look forward to seeing what she thinks of the beer I sent, but I know she's going to love them.
Posted by BrewEngland at 2:47 PM

What a great idea! I should mention this to my husband. We've got friends all over who I know would think this is worth the postage! :)