In case you missed Part I of the interview, I would strongly suggest catching up on that first!

Brew England: How did your parents feel about you going to Chicago to learn how to brew beer? Did they see that you could succeed at it and be happy doing that for a living? Were they skeptical?

Dave Lagueux: They weren't skeptical. They saw me working a lot for free, and how interested I was in making beer. I've always had an interest in mechanical/technical things, and they were happy to see me use that side. I think my parents understood that it was a trade like anything else. I can't thank them enough for being supportive and putting up with all the beer I had (and still have) around their house.

BE: You mentioned that you worked for Lowell Beer Works for about a year...What brought you to Trumer Pils in California? Did you transition immediately from New Hampshire to California?

DL: We toured a lot of breweries in Europe, but one of my favorites was the Trumer Brauerei in Salzburg. The tour was great, and the brewery is incredible. I saw an opening for a shift brewer at the Trumer Brauerei in Berkeley and sent my resume out. The next thing I knew, I was in California for a week-long working interview. I guess they liked me, because I've been at Trumer for over two years! I left Beerworks after a year to come out and work here. It's been a great experience so far!

BE: Moving from New Hampshire to California must have been a big move for you! When you were deciding to take a job in California, what were some of the things that influenced your decision? What was the working interview like?

DL: I think the biggest factor in me moving to CA was that my brother Mike was living in the Bay Area as well. I knew it would be nice to move to some place new, and it would be great to hang out with him while he was living here. I went to visit my brother for a few days and happened to see the opening at Trumer around the same time. I got in contact with them and said that I'd be in the area for a day or two.

I knew that working at Trumer would be a great experience for me, so I just went for it. They asked me to extend my trip and work for a few days. The working interview was a great way to figure out if I liked California enough to live here, and if I liked working at Trumer. It was also a good way for them to figure me out as well. I met all of the guys at the brewery, and shadowed them as they did their jobs. I remember washing kegs for a very long time. I busted my ass doing that. I wasn't about to leave that place after 4 days of work without a job. 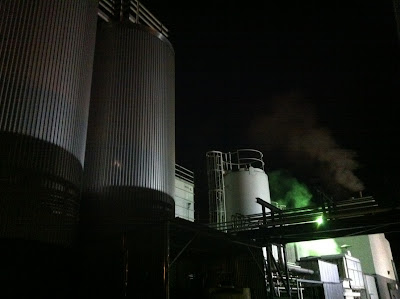 A picture of the brewery at 2am

BE: You said you're a shift brewer at Trumer, correct? Was this the position you were hired for initially?

DL: Yes. I came out here with enough experience to do all of the necessary tasks. Though being a "shift brewer" at Trumer is sort of different than most places our size. We are cross-trained to do every job in the brewery. I rotate around every 2 months, and switch between an AM shift (5am-3:30pm) and a PM shift (3pm-1:30am) Monday to Thursday. I might run the brewhouse for a few months, then to the cellars, then filtration. It keeps us really on our toes. It's easy to forget little things that can have a huge impact. 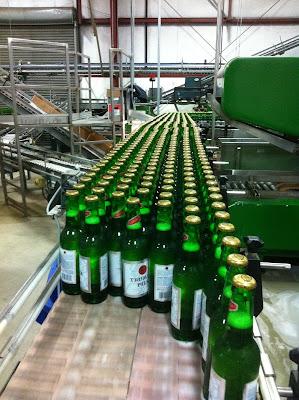 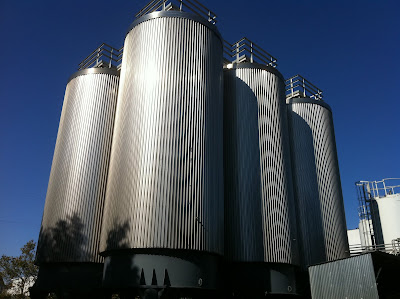 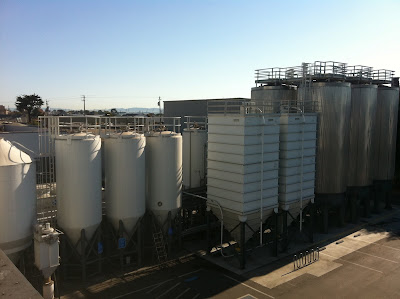 This helps figure out the scale of the brewery!

BE: What do you like most about the brewery there? Do the other brewers have similar backgrounds as you?

DL: I'd say I like the 4 day work week the most! No, I like the fact the we rotate around the brewery and get our hands involved in everything. My favorite shift is probably filtration, just because it's so complicated. It was probably what I was least familiar with when I started. It still seems funny to me that I can filter 12,000 gallons of beer in my shift. The guys I work with have all kinds of backgrounds. A few guys have related degrees, like Chemistry and Food Science. Other guys got into brewing some other way, like I did. Most of us have had some formal training as brewers either at Siebel or UC Davis.

BE: It seems like being a brewer can be a lot of fun, but at the end of the day it's still work. What do you do outside of work for fun?

DL: My girlfriend and I ride our bikes a lot. We do a lot of outdoor activities and cook a lot of food. We've been making a point to see all the important spots out here in California like Yosemite and Big Sur. Just last weekend, we did a kayaking/camping trip in Half Moon Bay which was really awesome.

BE: California is home to many great breweries, and a lot of us on the East Coast only know about some of them (Stone, Russian River, Sierra Nevada, etc). What are some of your favorite beers out there? Are there some small breweries or brewpubs that you really like?

DL: I love Ballast Point, down in San Diego. Upright Brewing in Portland is another one of my favorites. They're brewing lots of interesting Saisons. There's a lot of great brewers out here doing interesting things. Locally, I like Drake's, Black Diamond and Firestone Walker. We're really spoiled out here with the selection of Belgian beers, too.


I'd really like to thank Dave for being the first interview conducted here at Brew England. He gave a lot of great insight on his transition from homebrewer to commercial brewer. Stay posted to new posts coming soon, including a Meet the Brewer segment with Helder Pimentel of Backlash Beer!
Posted by BrewEngland at 2:00 PM

Email ThisBlogThis!Share to TwitterShare to FacebookShare to Pinterest
Labels: Meet the Brewer