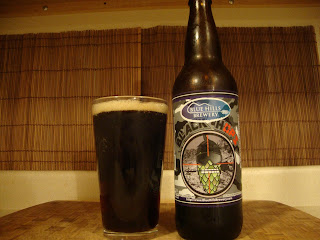 The beer pours an extremely dark color, with a tinge of dark amber notes. It leaves a moderate and fluffy head, with a coloring of a cream stout or porter. The beer retains the head decently though, as it takes some time to dissipate. The smell is fitting to the color, giving hints of roasted malt, chocolate, and coffee.

At the same time, the brew features a very dark, chocolate and porter-esq flavors. It is very mild, and not very bitter, contrary to the description given on the Blue Hills website. Certainly my pallet is different than theirs, but I’m also accustomed to hoppier or bitter beers like IPAs and Imperial IPAs. Any bitterness or citrus aroma was masked by the body of the malt. The beer is very filling, and considering it’s only available in 22 oz. bombers, it’s probably a wise choice.

Now I must say – I wanted to hate this beer. I know it’s biased, but I’ve tried a few different beers from Blue Hills Brewery, and have yet to find one that I actually liked. There’s a certain ingredient that gives their line up of beers a consistent off-flavor, and I’m thinking it’s the water they use while brewing (though I'm probably wrong). The first time I ordered their IPA, I couldn’t drink more than two sips. I’ve tried it since then, and still don’t care for it. But, I'm still willing to give it another chance.

I do however like to support local breweries and small businesses, so I was happy when the Black Hops didn’t share that same weird flavor. It may take another bottle or two to say that I actually like the beer, which I will pick up soon, but this is a step in the right direction for Blue Hills Brewery.
Posted by BrewEngland at 2:28 PM