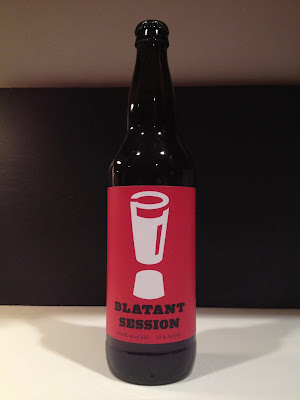 Blatant Brewery is the brain child of Matt Steinberg, former head brewer at Mayflower Brewing Co. A professional brewer for years, his brewing company Blatant had been in development for a few years. Well, Steinberg officially launched his first two beers - IPA and Session Ale, in late October 2011, and is beginning to pop up all over the place. Blatant Beer is also brewed at Just Beer in Westport, which makes for a great local for producing hand crafted beer! 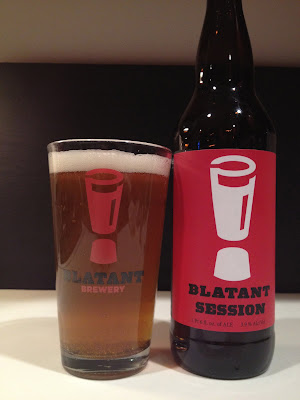 The Session Ale has a straw colored hue, which pours a medium fizzy, mostly white head. A bit of this bottle pours a hazy orangish color, as this bottle is unfiltered. The aroma of the Session Ale is biscuty and malty, with a gentle floral nose to it.

The flavor of the ale is very malty, with a touch of sweetness as hinted at by the aroma. You pick up a mild bitterness within the body, but to us it seemed to lack some overall flavor. We both felt though that it makes for a superb transitional beer for those looking to make the move to craft beer, but overall for the full fledged craft beer lover you might opt for an alternate brew - perhaps Blatant IPA might make for a better selection?

The mouth feel of the Blatant Session Ale is medium to full, as the brew is quite malty. It finishes rather dry with again a subtle sweet after tasted. It also leaves great lacing on your glass! 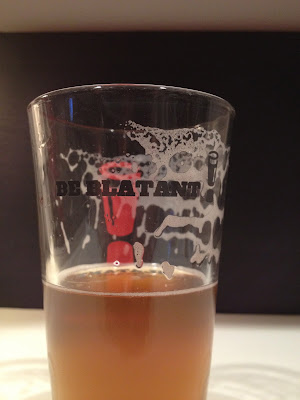 As with a typical session style beer, the you can drink this beer all day and therefore has a high drinkability level! At 3.9% ABV, you can have a few pints without falling over.

Out of the two Blatant beers we've tried, this is our second favorite. Part of being a beer blogger to us is recognizing that although you don't particularly are for a specific beer, doesn't make it a bad beer. While we weren't crazy about the Session Ale, it is not a bad beer. It's important to keep this in mind with any beer, local, regional, craft, or otherwise.

We look forward to more of Blatant Brewery's other beers in the upcoming months. Keep your eye out for the Session Ale and IPA at bars and craft beer stores near you!
Posted by BrewEngland at 4:43 PM

A transitional beer? You seem to be confused about what a session beer is. Gee, so it doesn't have as much flavor and body as an IPA with twice the abv and nearly twice the hops? Really?

We appreciate you leaving a comment (albeit anonymously), but we're fully aware of what session beers are. We're in no way comparing the Blatant Session to Blatant IPA; rather, we're saying if you decide to chose one over the other, the IPA is a better choice in our opinion.

We've had many session beers that are full in body in flavor, and we were not trying to knock this beer.

If you're a Macro beer drinker and are looking to get into the world of Craft Beer, we feel that the Blatant Session is a great beer to begin your journey.

We encourage any follow up comments. Please feel free to leave your name and email address too, as we would be happy to chat offline.