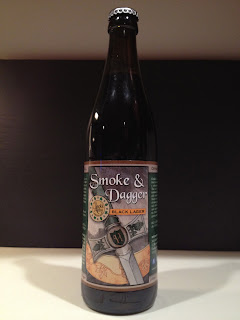 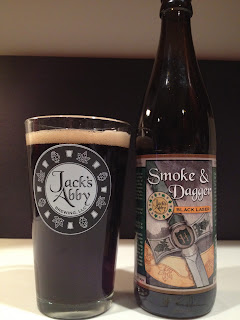 The Smoke and Dagger pours a pure black liquid, which is dark as night. However, if you look at the glass in the right light, you can pick up a slight red tinge. The head is fairly thin and off-white, and fades quickly into the brew. The aroma is earthy, with a dark roasted/toasted malts, but hints at having a tad bit sweet, subtle, and gentle hop characteristics.

The flavor of this Black Lager's label calls this basically a cross between a schwartzbier and smoked porter, and you can totally see that. This rich, full bodied, malty treat gives you nice tones of bacony, smoky, charred malts. You can also pick out nice dark bitter chocolate tones of the Smoke & Dagger too.

The mouth feel is surprisingly mild, considering the up front appearance of the Smoke & Dagger. It's not too heavy, and finishes with a sublet bitterness and lingering flavor.

Finally, the drinkability of Jack's Abby Smoke & Dagger is moderate for sure This was one of the first Jack's Abby beers Adam tried at their brewery during their hop harvesting event, and really enjoyed it then too. Now that it's in bottles, we'll be sure to pick up another bottle or two soon! It goes down so smooth!
Posted by BrewEngland at 10:30 AM