Why not? When it's a Session beer (typically 4.5% ABV or less) you can enjoy a few pints and hit the rest of the day hard without slowing down. 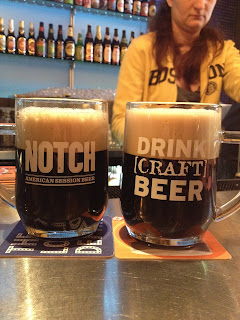 It was brought to our attention recently (read: Friday) that Jeff and Devon from DrinkCraftBeer.com teamed up with Chris Lohring from Notch Session to brew a Coffee Milk Session Stout as part of the Notch Cask Series. They were celebrating the release of the brew with a Beer Brunch at the Lower Depths in Kenmore Square, which is where we ended up yesterday morning.

Despite it being a relatively clear and very sunny day, it was a bit chilly when we arrived in Boston. We were happy to arrive around 11:10am, but to our surprise the Lower Depths actually hadn't opened yet. This meant we had to stand in the chilly Boston air for a bit. Fortunately though, we ran into a few people we know - Rebecca from MA Girls Pint Out, Jeff from DrinkCraftBeer.com, and Adam Greiner from Chatham Bars Inn.

We were about 15 people deep in line, but once the doors opened we made our way to the bar. It was a pretty amazing sight though, because with the turn of the locks and a couple of minutes, the Lower Depths was completely full. Pulls from the cask were under way, and mugs of the commemorative Notch Session / Drink Craft Beer mugs were filling up with tasty Milk Session Stout! The Milk Stout has a deep, dark color with a chocolate milk colored head. It features a light body, with a nice moderate hint of lactose sugar (which is added to the beer to make it a milk stout), and a gentle hint of coffee. In fact, to us, the coffee was extremely aromatic, but less pronounced within the beer. It made for an overall tasty beer, which clocked in at 3.8% ABV.

The keg was quickly kicked, completely running empty in approximately 85 minutes after the doors opened. Fortunately though, there are several other casks of this beer in and around the Boston area. You can view the draft accounts on the Notch Brewing website in an effort to catch this beer before it's gone!
Posted by BrewEngland at 10:18 AM

Thanks for coming! We stole one of your photos for our facebook page!

Is it really stealing if you tell the person you "stole" the item? haha. No problem, glad to be in the audience for another great event!