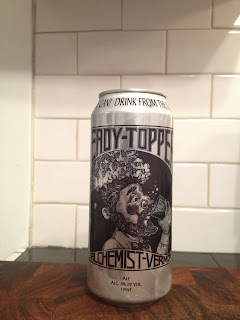 We were fortunate enough to have a four pack of Heady Topper delivered to us by our good friend Pat last week. He took a trip to Burlington, VT and made a stop at the Alchemist on the way home. However, this was not the first time we had Heady Topper. We received a few cans as part of a beer trade last December and thoroughly enjoyed each can. The Alchemist Heady Topper is only distributed in the state of Vermont (which is another great reason to visit), but is sometimes available at select Boston area beer bars. We found it at Vee Vee in JP and The Lower Depths in Boston. Rumor has it that Eastern Standard in Kenmore Square Boston has a secret stash of it too, but is only available by request. 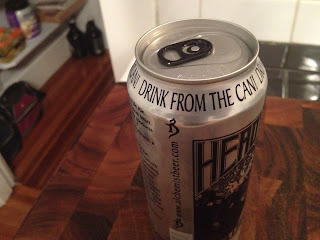 The can of Heady Topper clearly states, “Drink from the can!” Who are we to argue with The Alchemist? However, for the purposes of this review, we poured a little out to show the color.

The color is a pale yellow and pours a small off-white colored head. The head recedes fairly quickly, but the lacing on the glass is nice.  Honestly, we never drink it out of a glass, so it was easy forgetting what the beer looked like. In fact, it wasn't until the 4th time we drank this that we actually poured a little into a glass to check the color. 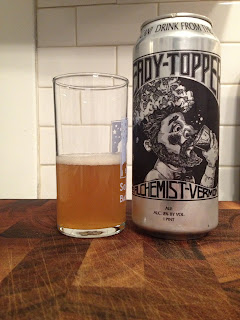 The aroma is SUPER piney and abundantly floral from all the American hops used in the brewing process. There are notes of malty sweetness that creep through, but they are mostly overrun by the hop scent.

The flavor of Heady Topper is fantastic. It actually starts sweet, but then the beautiful hoppy goodness takes over. It has tones of citrus, but mixed with the aromatic hops it really involves your senses. The beer coats your entire palate from front to back; yet, it is not heavy and in fact is a bit milder on the malt than previously though.

For an 8% ABV beer and for as much hop wallop as these cans packs, it is overwhelmingly drinkable. It’s a sipper though as you’ll want to savor all 16 ounces. Two or three of these tall boys in a sitting isn't hard to manage, but depending on how many you have may moderate how many you drink in your session.
Posted by BrewEngland at 1:00 PM