What do you get when you mix NPR, amazing craft beer, and incredibly delicious food? Aside from a good time, you get the first ever WGBH Craft Beer Fest! Put on by WGBH, Massachusetts' Public Radio and Television station, back on July 13th, this mix of New England craft brewers and area food and beverage business attracted a variety of craft beer geeks and foodies alike!

Our friends Sarah and George were joining us for the evening and we made a stop in at Deep Ellum in Allston for some grub and pints. Despite having just ate, we were still planning our plan of attack for the snacks that were going to be available to us.


The event took place on the studio grounds in Brighton, and proved to be a sort of hidden gem for a beer festival. While the campus of WGBH is vast, there was a good sized alley of sorts where the beer tents were set up. Aside from the free parking, this festival had some of the best food we've ever seen.

As soon as you walked through the gate, you were greeted instantly by the Roxy's Gourmet Grilled Cheese Food Truck. Churning out overwhelmingly good, gourmet grilled cheese sandwiches, you couldn't help but stop in for a snack. 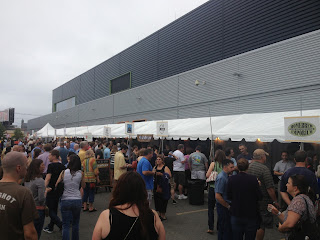 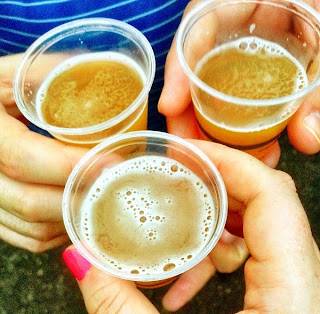 The brewers were set up on either side of the alley, just around the corner. In addition to brewers like Slumbrew, Baxter Brewing Co., Pretty Things, Watch City Brewing, Peak Organic, Smuttynose, White Birch, and more, there were also some other awesome vendors there. Our friends Kate and Suzanne from Craft Beer Cellar were offering up samples of a variety of choice Belgian beers, including the ever so rare Westvleteren XII, as well as some other incredibly hard to get beer like The Alchemist's Heady Topper!


The folks from Modern Homebrew Emporium in Cambridge were on hand and were actually brewing a beer. They were offering advice to those looking to get into the hobby, and additional pointers to the many homebrewers who were in attendance.

Over by the live music, the Moyzilla Food Truck was cranking out various delicious small bites like dumplings and grilled chicken skewers. You couldn't help but fill up! 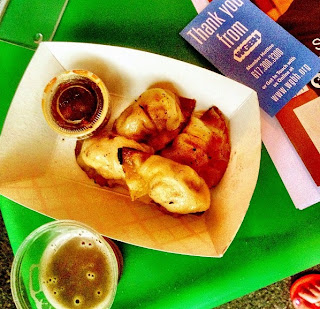 The lines for beer were long at times, but they were always moving. These brewers are serious professionals and know how to keep the crowd happy.

The only drawback from this event was the periodical light rain that fell. Fortunately, it was light and we had beer, so it wasn't much of an issue. The free parking was a definite bonus! It sounds like the event was a success, so don't be surprised if you see the 2nd Annual installment next summer!